One of the requirements to have a design protected under the Community Design Regulation (CDR) is its individual character. According to Article 6 CDR, a design has individual character if the overall impression produced by it on the informed user differs from the overall impression produced on such a user by any design that had been available to the public earlier (in case of an unregistered Community design, before the date of which the design for which protection is claimed had been first made available or, in case of a registered Community design, before the date of filing the application for registration or, if a priority is claimed, the date of priority). In order to consider whether the design has individual character, the degree of freedom of the designer in developing the design has to be taken into consideration. It follows from the above that the addressed trade circles (informed users) – besides the freedom of the designer – are of decisive influence on assessing the individual character of a design.

In a decision delivered in October 2011 in the case Grupo Promer Mon Graphic SA v. OHIM, PepsiCo Inc (C-281/10P), the Court of Justice of the European Union (CJEU) had the opportunity to define the “informed user” as “referring, not to a user of average attention, but to a particularly observant one, either because of his personal experience or his extensive knowledge of the sector in question.” (paragraph 3)

In a most recent case involving a registered design filed by Porsche AG for the model 997 of its Porsche 911, as depicted below,

the General Court of the European Union had the chance to apply the definition of the “informed user” and to deal with the concept of “freedom of design ” in order to render its decision.

The registered design was attacked by an application for declaration of nullity based on the argument that novelty as well as individual character was not given at the time of filing the design application. The Applicant argued in that regard that these designs did not differ significantly from other models of Porsche 911 that had been developed since 1963, particularly: 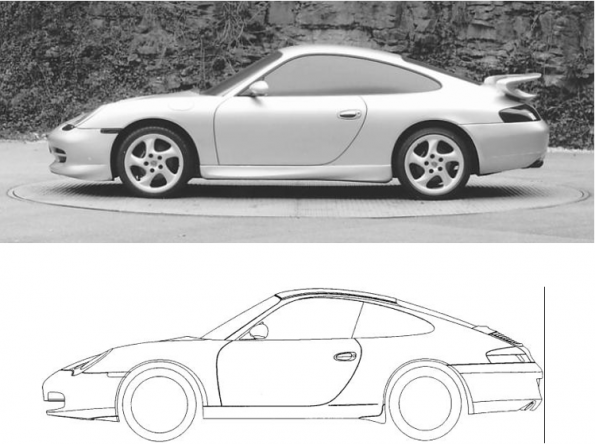 In defence Porsche AG argued that in the present case the “informed user” had a higher level of attention going beyond the usual level, which would make him or her pay particular attention to the different model variants of the Porsche 911. The user’s interest in the vehicles for which the designs at issue should be used and the informed user’s knowledge of the relevant market segment would be particularly high when such cars are expensive luxury saloons or sports cars such as, in the present case, the Porsche 911, which has been on the market for decades. Consequently, the informed user could not be a “fictitious person” or an indefinite person, but must be determined “empirically” with regard to the specific product in question.

With reference to preceding case law the Court asserted first of all that the term “user” requires that the relevant person may actually use the product incorporating the design. Moreover, to be “informed” requires that the user is aware of the various designs existing on the relevant market. What is remarkable in that regard is that the Court emphasized – with reference to preceding case law of the Court of Justice of the European Union – the importance that a user views a design with the relevant high attention due to his or her interest in such goods. Such a user is to be allocated between the average consumer being relevant in the field of trademarks and the expert being a specialist in relation to technical features. As a consequence, insofar as a design right is concerned, the user has to be defined as a person who pays particular attention to the relevant products or services.

The term “informed user” referred to a “fictitious person”, since it was a legal term specifically created for assessing the individual character of a design on the basis of Article 6 CDR. This term could only be seen as a general indication of a person with standard characteristics, but not as a case-by-case basis with respect to this or that design. In the present case, the user would be informed on the category of products (namely: cars; LOC 12.08) and not on the specific car so that not the informed user of a Porsche 911 but passenger cars in general have to be considered. In that regard, it must be stated, first of all, that in order to determine the products in which a design is to be incorporated or to be used, it is first of all necessary to take account of the relevant information included in the application. In addition, where appropriate, the design itself may also be taken into account, to the extent that it permits the nature, purpose or function of the product to be specified. The fact that the design itself is taken into consideration may make it possible to identify the product in question within a broader category of products specified at the time of entry.

In the present case and in addition to the fact that the designs of cars are limited to their purpose and have to comply with legal requirements, the Applicant argued in favour of the “iconic character” of the design of its cars. Since the public expects a Porsche to looks like a Porsche, small differences in the design of the Porsche 977 – in comparison with other models of Porsche 911 -would be sufficient to lead to distinct overall impressions.

By comparing the overall impression created by the designs of the Porsche 977 with the designs of Porsche 911 under the perspective of the informed user, the Court was only able to find differences that, in its understanding, were valued as insignificant.

As designs are powerful instruments for consumers to create their value perceptions of products and brands, the Judgement of the General Court may affect the already in normal circumstances difficult decision faced by designers to refresh an existing design.

Furthermore and as the “informed user” referred to in Article 6 CDR is a “fictitious person” with standard characteristics and information on the category of products indicated in the application form of a Community design, but not only on one specific product from this category, it is necessary to take care of the respective information in the application, which may be broad (e.g. motor cars, buses and lorries) or focused on certain terms (e.g. racing cars).