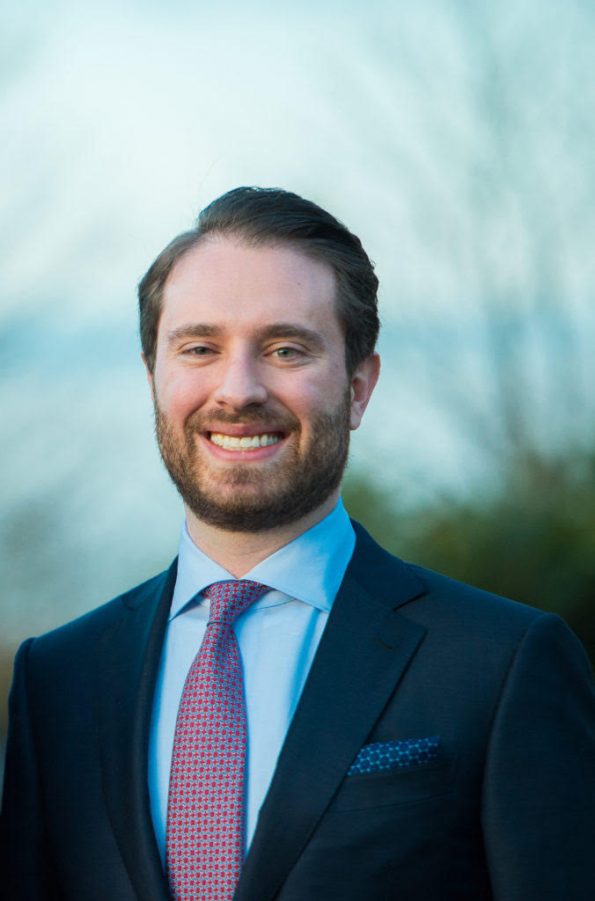 Ryan Benjamin Abbott is a second generation IP Law professor (son of the famous author and scholar Frederick M. Abbott – Florida State University College of Law), a litigator, a consultant and an arbitrator in the USA and UK. Although he is quite young his experience in Law and Medicine is impressive.

His short resume available at his personal site (here) says:

“Ryan Abbott, MD, JD, MTOM, PhD is Professor of Law and Health Sciences at the University of Surrey School of Law and Adjunct Assistant Professor of Medicine at the David Geffen School of Medicine at UCLA. He is the author of The Reasonable Robot: Artificial Intelligence and the Law published in 2020 by Cambridge University Press, and he has published widely on issues associated with law and technology, health law, and intellectual property in leading legal, medical, and scientific books and journals. Professor Abbott’s research has been featured prominently in the popular press, including in The Times, the New York Times, the Financial Times, and other media outlets based on time. He routinely gives keynote lectures and presents internationally in academic (e.g., MIT, Stanford, Yale, Oxford, Cambridge), government (e.g., World Intellectual Property Organization, World Trade Organization, UK Intellectual Property Office), and industry (e.g., Google, IBM, Swiss Re) settings. Managing Intellectual Property magazine named him as one of the fifty most influential people in intellectual property in 2019. Professor Abbott is a mediator and arbitrator with JAMS and a panelist with a variety of national and international dispute resolution service providers. He is a CEDR-accredited mediator and a Fellow of the Chartered Institute of Arbitrators (FCIArb). He has worked as a partner in legal practice, where he primarily focused on transactional matters and intellectual property litigation in the life sciences, and he has been general counsel of a biotechnology company.Professor Abbott is a licensed physician, patent attorney, and acupuncturist in the United States, and a solicitor advocate in England and Wales. He is board-certified by the American Board of Legal Medicine (ABLM). Professor Abbott is a graduate of the University of California, San Diego School of Medicine (MD), the Yale Law School (JD), University of Surrey School of Law (PhD), as well as a Summa Cum Laude graduate from Emperor’s College (MTOM) and a Summa Cum Laude graduate from University of California, Los Angeles (BS)”.

Recently, Ryan has visited Brazil twice and presented relevant speeches in IP policy, A2K (access to knowledge), A2H (access to health), and Artificial Intelligence. Without any favor, his recent work “The Reasonable Robot”  is the best book on IA, IP and Law that has been published, worldwide, yet. This interview has been conducted by Prof. Dr. Pedro Marcos Nunes Barbosa on September 2021.

ip-iurisdictio: Who were the most important Law Professors of you had at you Bachelor’s and Masters Degree?

Ryan Benjamin Abbott: I never had a law professor in my bachelor’s and masters degrees. Law is, generally, not a subject offered at an undergraduate level in the US where I did most of my studies. My master’s was in Traditional Oriental Medicine, so very far afield from law! But, the professor I connected with most at law school was Ian Ayres. He and I even collaborated on a couple of papers – one on drug and device regulation in a legal journal, and also a randomized controlled trial of acupressure!

ip-iurisdictio: How does your double (Medicine and Law) degree impact on the way you analyze IP?

Ryan Benjamin Abbott: I tend to approach things from a life sciences perspective. For instance, patents are often critical to commercializing new drugs and medical devices, whereas they are often less important to commercializing software.  I also think that having formal scientific training helps me to understand technical issues more completely than someone without such training. Sometimes that can be very useful for IP-related matters.

ip-iurisdictio: Which are the top 10 US IP books or articles you would recommend to a young student reading list?

Ryan Benjamin Abbott: That strikes me as a lot of reading!  For a student primer, I like these two volumes:

ip-iurisdictio: Considering the US academia, in your opinion who are the ten most influential IP Law professors right now?

ip-iurisdictio: Considering the Economic approach to IP Law, in your opinion, which papers you would recommend for a young student to read?

(a) Intellectual Property: The Law and Economics Approach – Richard A. Posner (here)

(b) An Introduction to the Law and Economics of Intellectual Property – Stanley M. Besen, Leo J. Raskind (here)

ip-iurisdictio: Considering your recent blockbuster book – “The Reasonable Robot” -, which of the ideas wrote in this piece you would speculate to impact the future of IP Law regulation?

Ryan Benjamin Abbott: I hope that the central theme of the book – that the law should not discriminate between AI and human behavior – will have an impact. More specifically, this is relevant to the protection of AI-generated works, such as articles written by AI, and inventions generated by AI under circumstances in which there is not a traditional human author or inventor.

(a) Alice Corp. v. CLS Bank International, 573 U.S. 208 (2014), regarded patent eligibility for “software patents” although not explicitly discussed as such in the case. Together with the 2010 Bilski v. Kappos, these were the first Supreme Court cases on the patent eligibility of software–related inventions since Diamond v. Diehr in 1981;

(b) Google LLC v. Oracle America, Inc. 593 U.S. ___ a case on computer code and copyright law, and whether use of application programming interfaces (APIs) was fair use and whether APIs could be protected by copyright. The court held Google’s use of the APIs was fair use, and did not decide the copyright issue. APIs are a core part of many software programs and libraries. Also gives important insight into the fair use test;

(c) Bilski v. Kappos, 561 U.S. 593 (2010), held that the machine-or-transformation test is not the sole test for determining the patent eligibility of a process, but rather one means of determining whether a claimed invention is a process;

(f) Diamond v. Chakrabarty, 447 U.S. 303 (1980), dealt with whether genetically modified organisms could be patented. Widely credited with spurring the development of the biotech industry in the United States; (h) Matal v. Tam, 582 U.S. ___ (2017) held the provisions of the Lanham Act prohibiting registration of trademarks that may “disparage” persons, institutions, beliefs, or national symbols with the United States Patent and Trademark Office violated the First Amendment;

(g) Sony Corp. of America v. Universal City Studios, Inc., 464 U.S. 417 (1984), held that the making of individual copies of complete television shows for purposes of time shifting does not constitute copyright infringement, but is fair use. The Court also ruled that the manufacturers of home video recording devices, such as VCRs, cannot be liable for infringement;

(h) Eldred v. Ashcroft, 537 U.S. 186 (2003), upheld the constitutionality of the 1998 Sonny Bono Copyright Term Extension Act (CTEA). This prevented a number of works from entering the public domain; and

(i) Apple Inc. v. Samsung Electronic Co., Ltd. was the first of a series of ongoing lawsuits regarding smartphone and tablet design. At the time, Apple and Samsung collectively made most smartphones worldwide.

ip-iurisdictio: Do you consider that IP Law doctrine to have a major impact in convincing opinions on the Judiciary on USA rulings?

Ryan Benjamin Abbott: Referring to academic literature is not currently in vogue in the US, including at the Supreme Court. Chief Justice John G. Roberts, Jr. famously characterized legal scholarship in 2011 as concerned with “the influence of Immanuel Kant on evidentiary approaches in eighteenth century Bulgaria or something…” A relatively small number of published judicial opinions cite academic literature. However, scholarship may also have an indirect impact on how the law evolves – from introducing new ideas, to changing norms, in ways that is difficult to evaluate. The short answer is that I think academics and judges interact and engage with each other less in the US than in other jurisdictions such as Brazil or the United Kingdom.

ip-iurisdictio: Do you consider WTO and WIPO’s Treaty to be important on national IP Law rulings on the USA?

Ryan Benjamin Abbott: In my experience, many US judges tend to be US centric in their approach to resolving disputes. US law is required to comply with these treaties, but beyond that, US cases are decided on the basis of US law with relatively few decisions or judges looking outside America for guidance and precedent – even for international cases. There are exceptions…

ip-iurisdictio: Do you consider that IP Specialized State and Federal Courts raise the quality bar on IP rulings?

Ryan Benjamin Abbott: I do. Specialized courts are able to develop stronger expertise in a particular area of the law and have the potential to more efficiently and consistently resolve cases.

ip-iurisdictio: What do you expect to be the major changes in IP Law on the next ten years?

Ryan Benjamin Abbott: I think that AI and IP is going to be a major area of change for IP law. Both because the economic impact of AI is likely to be very significant, and because it poses new challenges to historical doctrines – such as cases in which AI functionally is creating new works, infringing works, or setting standards against which to judge human creativity.

ip-iurisdictio: Do you think “one size fits all” TRIPs, minimum standards, regime to be appropriate to all countries that participate of the WTO?

Ryan Benjamin Abbott: Different countries can obviously be in very different circumstances with respect to IP, as producers and consumers, and as producers and consumers of different sorts of IP. There is an inherent tension with applying a “one size fits all” model to countries that are not the same, but on the other hand there are also benefits to having a harmonized international IP system. As a practical matter, it is probably too late to unwind the clock on TRIPS, but it is also the case that TRIPS has a number of flexibilities built into it to take into account that different countries are differently situated. Countries should be willing to take advantage of these flexibilities when they need to, and especially when it concerns such matters as access to life-saving medicines.

ip-iurisdictio: Do you think that long deadlines in copyright (in Brazil up to 70 years after the author’s death) to be fair and necessary to stimulate IP creation?

Ryan Benjamin Abbott: To give the lawyer’s answer: “it depends”. Trademarks and copyright are important types of intellectual property that generate valuable social benefits, but they also come with a variety of costs including with respect to restricting speech. I don’t think someone can say that it is always more important to protect property or that it is always more important to protect speech. There is a need for a flexible and pragmatic approach that weighs the importance of protecting property in a particular instance with the harm of preventing certain activities. It is also the case that we should be less concerned about restricting commercial speech than other sorts of speech.

ip-iurisdictio: Do you want to send a message to your Brazilian readers and admirers?

Ryan Benjamin Abbott: It has been terrible not to be able to visit Brazil since the pandemic. I’m looking forward to coming back once things get closer to normal, and caipirinhas for everyone!