While the European Union Trademark Regulation mentions in particular colours to be protected as trademarks, it is difficult to achieve their registration due to a number of aspects:

While single colours may be merely specified by indicating a colour reference of established colourmatching systems, such as RAL or Pantone, considerable difficulties exist with regard to colour combinations without delineated shapes or contours. According to the present legal situation any sign that is capable of being represented on the Register is capable of being registered. Combinations of colours fulfil the prerequisite of clear representation by referring to a colour code and a “reproduction that shows the systematic arrangement of the colour combination in a uniform and predetermined manner”. Moreover, a description – while not required – is strongly recommended. The information in relation to graphic representation specifying the colour combination in more detail must have the effect that the subject matter and the scope of protection sought are clearly and precisely determined ( CJEU Judgment of 27 March 2019 Hartwell C-578/17, EU:C:2019:261 para. 38 and the case law cited). In the afore-mentioned decision the CJEU emphasizes that where the application is accompanied by a verbal description of the sign, such a description must serve to clarify the subject matter and scope of protection sought and must not be inconsistent with the graphic representations submitted with the application or give rise to doubts as to the subject matter and the scope of that graphic representations.

With regard to the question of whether the representation of a contourless colour combination, such as

fulfills the application requirements, the court outlined in the decision Heidelberger Bauchemie (C-49/02 EU:C:2004:384) that a graphic representation of two or more colours designated in the abstract and without contours must be systematically arranged in such a way that the colours concerned are associated in a predetermined and uniform way. The mere juxtaposition of two or more colours, without shape or contours, or a reference to two or more colours “in every conceivable form” will not exhibit the qualities of precision and uniformity required by Article 4 of the Regulation. Such representation would allow numerous different combinations, which would not permit the consumer to perceive and recall a particular combination, thereby enabling him or her to make further purchases with certainty, any more than they would allow the competent authorities and economic operators to know the scope of protection afforded to the proprietor of the mark.

Most recently, the Court of Justice of the European Union (CJEU) had another opportunity to specify the requirements for an effective colour combination application. Said decision of 29 July 2019, C-124/18 P (EU:C:2019:641) related to invalidity proceedings directed against two Union trademark registrations of Red Bull as reproduced below:

The two trademarks were registered on the basis of distinctive character acquired through use. With regard to the description of the proportion of the colours the first application claimed protection for the colours blue (RAL 5002) and silver (RAL 9006), whereas the ratio of the colours as being approximately 50% to 50%. The second application indicated the colours as blue (Pantone 2747C) and silver (Pantone 877C) combined with a description that the two colours will be applied in equal proportion and juxtaposed to each other. The Cancellation Division of the EUIPO declared the two marks in question invalid, inter alia on the ground that they were not sufficiently precise. Red Bull filed notices of appeal against the two rejecting decisions before the Board of Appeal of the EUIPO, which rejected the appeals. The two actions for annulment of the decisions of the Board of Appeal before the General Court were also rejected. Red Bull subsequently brought the two cases before the CJEU.

With regard to the reproduction of the colour combination and the accompanying descriptions, the General Court was of the opinion that the mere indication of the ratio of the two colours blue and silver allowed for the arrangement of those colours in numerous different combinations and did not therefore constitute a systematic arrangement associating the colours in a predetermined and uniform way. Thus, it concluded that the graphic representation, accompanied by the description indicating only the proportions of the two colours, could not be considered to be sufficiently precise and that hence the contested trademarks had not been registered in accordance with the relevant provision of the Regulation. In particular, the General Court referred to the word “approximately” in the description of one of the two trademarks. It outlined that such a description merely reinforced the lack of precision of the graphic representation, which allows for different arrangements of the colours at issue. With regard to the description of the second trademark at issue, which was described as

“the two colours [would be] applied in equal proportion and juxtaposed to each other”,

the General Court found that juxtaposition can take different forms, giving rise to different images or layouts, while still being in equal proportion.

The CJEU shared this opinion and thus dismissed the appeals of Red Bull.

First of all, the decision confirms the rather high requirements as to the “reproduction” of an application of an abstract colour combination for registration as a Union trademark in order to fulfil the formal requirements as defined in Article 4 of EUTMIR, namely

“… being represented on the Register of the European Union trademarks … in a manner which enables competent authorities and the public to determine the clear and precise subject matter of the protection afforded to its proprietor.”

Moreover, it is doubtful whether pictures of the products to be marked with a colour combination will be helpful. In order to safeguard that such pictures fulfil their purpose, namely to allow to determine the scope of the requested protection in an unambiguous manner, the information to be provided by such reproductions must exclude the possibility that the colour combinations

With regard to single colours the task to provide a clear “reproduction” of the mark to be protected might not be difficult. The Louboutin mark may serve as an example: 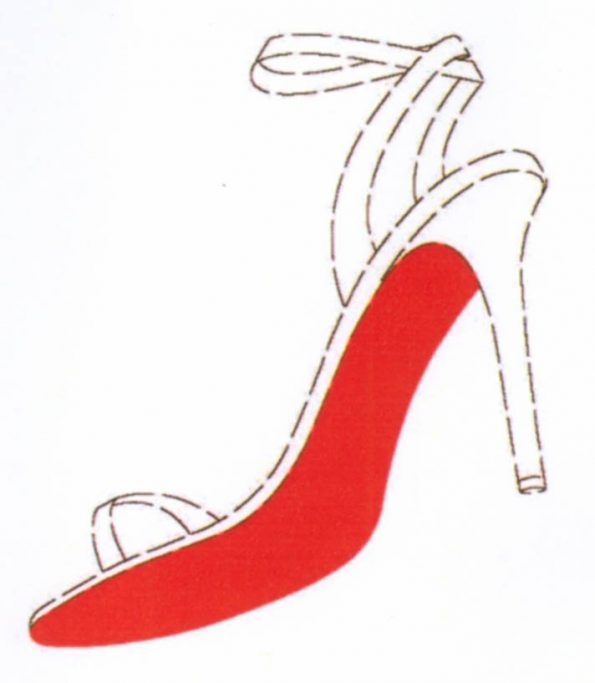 The Benelux trademark of Louboutin is described as follows:

“The mark consists of the colour red (Pantone 18-1663 TP) applied to the sole of the shoe as shown (the contour of the shoe is not part of the trademark but is intended to show the positioning of the mark)”.

As far as colour combinations are concerned, the following example may be helpful:

“The mark consists of the colour green (Pantone 7742 C) and orange (Pantone 1505 C). The frame of the machinery and equipment is green. Mounted parts, containers and lids are orange.”

As this example indicates, the description of a colour combination together with a visual reproduction of the colours as applied to the goods might be easy in certain cases; in most of them, however, this is difficult, or near impossible.

That accompanying reproductions of the product to be marked with the colour combination may be even rather problematic to be filed is indicated by the General Court’s decision in the Red Bull case. In para. 56 of the judgement, the General Court considered the material filed by the applicant to prove the required distinctiveness through use by qualifying it as samples of reproduction of the marks, reproduced in different variations in contrast to the abstract reproduction of the two colours accompanying the application. While, on the one hand, the submission of photographic reproductions of goods showing how the colour combination will be applied might be imperative in order to guarantee an unambiguous determination of how the colour combinations will be applied on products or in relation to services, such material must be limited to reproductions which do not allow the conclusion that the arrangement of the two colours can take different forms causing different images and layouts.